The Chinese-based vehicle manufacturer (pronounced “change”) has officially unveiled its electric medium-duty panel van in Brooklyn, New York, with Ryder taking delivery of 125 units for its rental and leasing fleet.

The initial rollout will be in key California markets including Los Angeles, San Francisco, and San Diego, as well as New York and Chicago. Ryder will provide parts distribution, service and support.

“All the trends in diesel are going in the wrong direction,” said Chanje Chief Executive Officer Bryan Hansel, noting that diesel equipment is increasingly expensive to build, purchase, and maintain. 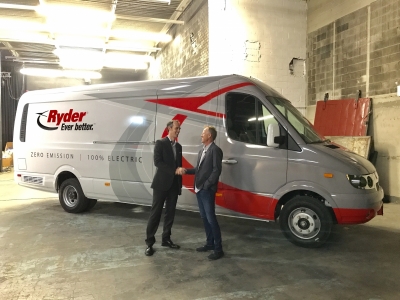 China’s demand for electric vehicles is expected to outpace North America’s needs in coming years, but the U.S. market sets the highest bar for vehicle reliability and safety, and it is home to some of the largest delivery companies and consumer brands expected to use the vehicles, Hansel says. This is being developed as a “world” truck for markets here and elsewhere, and the company says it has invested about US $1 billion in the design and related tooling.

But Canada’s official rollout has to wait for now.

“It’s demand-driven. We’re certainly going to be inquiring to see the uptake opportunity,” Hansel said, referring to Canada as a parallel market to the U.S. “It seems like a natural progression.”

The V8070 van will reportedly hold a 6,000-pound payload in its cavernous 580-cubic-foot cargo bay. “For package delivery, it’s a lot,” Hansel said, referring to the growing trend in home deliveries as a key driver behind such vehicles.

Meanwhile, the van promises a 160-kilometer range, depending on the application, and is charged at the equivalent cost of 4.7 liters per 100 kilometers. That’s based on an average payload of 50% through the day. Where a fuel cap would traditionally be found, drivers can access the SAE J1772 connector for the 7.2-kilowatt onboard charger. Regenerative braking is also used to extend the battery’s range.

Hansel founded Smith Electric in 2009 and launched a commercial electric truck in 2010, but that was a retrofit. Chanje offers a purpose-built platform, engineered as an electric vehicle. And that’s presented as an important distinction.

The torque delivered through the pair of rear electric motors offers 30% gradeability, giving it enough power to accelerate from a stopped position on a steep hill.

Electric vehicles don’t traditionally offer the gear ratios for a climb like that. “They usually quote [a gradeability of] 20%, and even though torque seems to be your friend, the gear ratios that people tend to put into them don’t give them the ability to climb really steep grades. And if they do, they tend to lose highway speed. We have an 80-mile-per-hour top end and we have the gradeability,” Hansel said. “If you’re running through a driveshaft and a rear differential by just upfitting an existing vehicle, then you’re going to lose on one of those ends. Either you’re not going to be able to climb the hill or you’re not going to be able to go fast on the highway.”

Chanje’s battery sits midway between the frame rails, offering a low center of gravity, and the power is delivered through a pair of electric motors at the rear.

At the center of the dash is a 10.4-inch touchscreen display based on an Android operating system that can be programmed for such things as navigation and telematics feedback. The model on display in Brooklyn devoted screens to such things as HVAC controls, radio, phone, backup camera screen, and charging information. “We’ve built it from the ground up to be a connected vehicle,” Hansel said, referring to data being downloaded to company servers. “If you’ve got an app on your phone, you can mirror it into the vehicle.”

As for cost, the choice of the electric van compared to its diesel-based counterpart is no longer financial, he said, adding that Chanje offers price parity when comparing lease costs, maintenance, and fuel. “The net number at the end of the month will be net-even cash flow.”

Ryder as a cornerstone

Ryder’s involvement has been a “cornerstone” of the company’s rollout strategy, Hansel stressed, referring to the distribution model. It gives users the confidence that, should something need to be repaired, the work can be completed nearby. “You need to be able to drive down the street and get it fixed.”

Ryder trainers have already been studying the equipment, and are now preparing technicians in the key markets. The first graduated just weeks ago. And about 200 unique replacement parts are also being stocked in distribution centers.

“We realize that we need to be able to support customers when they bring a vehicle in from a diagnostic perspective, so we’re installing chargers inside our shops,” says Chris Nordh, Ryder’s senior director – advanced vehicle technologies and global fuel products. Charging equipment will also be installed in Ryder lots to support rentals as well as leasing customers who need time to prepare for electrified equipment.

“Chanje is bringing a product to market that has the scale, the quality that we need to feel comfortable, but they’re way ahead of the rest of the market,” he said.

Of course, this is just the latest step in Ryder’s embrace of electrification. The company has already announced similar roles with Nikola Motors and Workhorse.

“We have a unique position in that we’re not aligned with a single OEM, so we have that capability to be able to be agnostic, and we are acting as a springboard on multiple levels,” Nordh says.

Chanje manufacturing is based in China, but final assembly in North America is to be completed at a site with a capacity of 10,000 to 20,000 vans. “That’s a reasonably light investment,” Hansel said. The search for a location to house that work is focusing around ports and is expected in coming weeks.

“There’s nothing out there like this at all,” Nordh says, referring to everything from the quiet ride to lack of exhaust.

There are more vehicles to come. A model with a shorter wheelbase, as well as a 20-plus passenger luxury shuttle, is in the works.