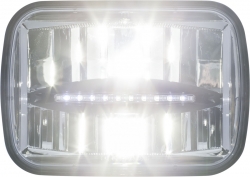 Optronics International has expanded its Opti-Brite family of LED headlamps by adding a new five-by-seven-inch combination high- and low-beam unit known as the HLL70HLB.

The series includes an optimized retroflective LED beam, the company says. It also features a conspicuity array at the center of the lens.

These LEDs actually face backward, pointing toward metallic parabolic reflectors, as a way to improve photometrics. The geometry also generates a tightly controlled blue-white light beam that is said to match the color temperature of natural light, making it easier to see the road.

The headlamps accommodate everything from a nine-volt to 33-volt electrical system, with an expected 30,000-hour service life. That’s about 15 to 30 times longer than the lives of halogen and HID headlamps, the company says.