STUTTGART, GERMANY – A group of Daimler AG researchers have been observing the effects of artificial daylight on the mental state and performance of truck drivers in a series of experiments set in the Polar Circle’s winter darkness. 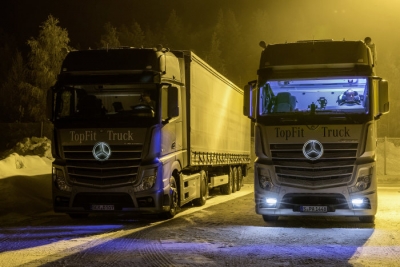 Siegfried Rothe, project manager and head of Daimler’s experiment works with Daimler to help improve living conditions for truck drivers, subsequently improving the image of the occupation. Rothe determined due to the shape of most truck cabs, only a comparatively low percentage of natural daylight reaches a truck driver’s light receptors, and sparked the idea for the experiment.

Eight Daimler test drivers participated in what would be two typical working weeks for truckers at the site in Rovaniemi, Finland.

Alternating between one week in a truck cab with conventional lighting and another week with a “Daylight+” module which supplied additional daylight while driving and during breaks, the truckers were observed and compared to only themselves.The drivers were examined for performance changes when they were exposed to additional biologically effective daylight under clearly defined conditions. The additional light was distributed in three different intensities.

After the two-week experiment concluded, the drivers were individually interviewed.

Having both spent time in the Arctic Circle during the darkest time of the year, Daimler test truck drivers, Richard Schneider and Philippe Strasser both expressed enthusiasm for Daylight+.  In addition, the drivers from the experiment consistently reported their perception of space in the cab to be considerably more pleasant with the article daylight system.

“When designing the series of tests, we hadn’t even considered that the space might appear larger,” said Rothe.

According to Rothe, it will take several months to analyse the data from the series of experiments in the Arctic Circle.

“Only then we will be able to make a recommendation as to whether the test findings should advisably lead to changes in the design of cab lighting.”