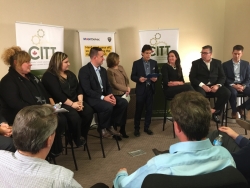 BRAMPTON, ON – Predicting the future is an inexact science, but several emerging trends offer glimpses of things to come. The Toronto chapter of CITT, which offers training in supply chain logistics, pulled together several industry representatives at its Fast Forward event on Thursday night to share thoughts on challenges they experience and expect.

Justin Bailie of Rose Rocket, which provides software for trucking companies, stressed that every business is in a “tech” industry – especially at a time when cloud-based systems are expanding the reach of software once exclusive to larger businesses. It all levels the competitive playing field. The platforms can also introduce new competitive pressures, though. Uber, which offers an alternative to traditional taxi service, could play a role in local cartage, he said. “Uber can catch on as much as they want to.”

Jim Pinder, corporate fleet director at Erb Group of Companies, simply warns about the perils of adopting emerging technologies too quickly. “We get inundated with all kinds of the ‘next best’,” he said, stressing the need to align the choices with business needs. “The worst thing you can do is jump on dead-end technology.” As much as he believes in the benefits of disc brakes, for example, he needs to balance that against the fact that many shops are not prepared to service them.

But some options have undeniably made a difference. Pinder has seen automated transmissions help reduce driveline failures and improve fuel economy. (“We have to thank the fleets that bought the first versions and struggled along,” he said, referring to the early adopters there.) Battery-powered Auxiliary Power Units have also helped individual drivers reduce idling time to 12-15% from a costly 40-50%.

Advancing technology has certainly changed the way Marc Poland, maintenance manager at Sheehan’s Truck Center, deals with recruiting challenges. His focus now is to ensure a job posting appears on as many computer screens and smart devices as possible, and he follows up with promising candidates more quickly than ever. “You’re texting to set up interviews with technicians,” he said.

Paul Kudla, regional vice president at Volvo Trucks North America, sees technology as a tool to attract and support every generation of worker, too. “We have to make the occupation more attractive and easier to enter, and keep the elder statesmen of our industry in the game,” he explained. Drivers over the age of 65 once struggled to apply a clutch. Automated transmissions mean they don’t have to.

Enhanced vehicle systems also offer more insights for shop teams than ever before.

Shops are looking at fuel economy and trip data as well as the active or logged fault codes, Poland said as an example. “It helps us not only repair the truck but also to make sure the truck is running more efficiently.”

Pinder sees real value in systems that diagnose equipment challenges. Instead of spending a half day on a diagnostic tree, technicians can focus on two to three items. He recalled how his shops were missing coolant leaks in EGR coolers because drivers were topping up reservoirs and continuing down the road. Sensors can now warn of the coolant losses before breakdowns occur.

4.       Platooning before autonomous vehicles – just not yet

Selected technologies may still be further away than some people think. “Autonomous trucks? We’re not in the Jetsons age right yet. Platooning? It’s not that far away,” Kudla said. But while the technology exists to allow trucks to travel in tight, fuel-saving packs, he isn’t ready to use it for a run across Toronto. And he stressed that demonstrations of semi-autonomous vehicles, such as Otto’s recent delivery of a load of beer, are simply demonstrations. They aren’t ready for active service.

Larry Mitchel, director of government services for United Van Lines, referred to the need to develop diverse workplaces. “It’s very easy to hire people that think the same way you do and live in the same communities,” he said. “But there’s so much talent out there.”

The diversity itself is also taking different forms. Carolina Billings, a human resources specialist with Hive Consulting Group, referred to roles for aging employees who are healthier and more active than generations of previous senior citizens. There’s a lot to be said for experience, she said.

Women, meanwhile, have much to offer a workplace because they naturally tend to find ways to collaborate, she added.

The question is whether workplaces need to adapt to accommodate the added diversity. Vania Agostinho, a truck and coach technician apprentice at Carrier Centers, offered one practical example of something that could be done. “It would be nice to see female washrooms on the shop floor,” she said. “You want them to feel that they’re part of the team – not that they have to go to the office.”

Katie Erb, an account manager with Erb Group of Companies, has worked through the ranks of her family fleet, including time on the dock, dispatch, administration and sales. But while millennials work effectively outside the office and beyond a fleet yard, it can be all too easy to overlook their contributions.

“It’s hard to combat the question of how effective you are being when there are no eyes on you,” the road warrior admitted.

As a generation, she thinks her peers are always looking to find ways to climb the corporate ladder, too. “If I’m in the same position for two years, I think I’d go stir crazy.”