How to keep your truck lights shining 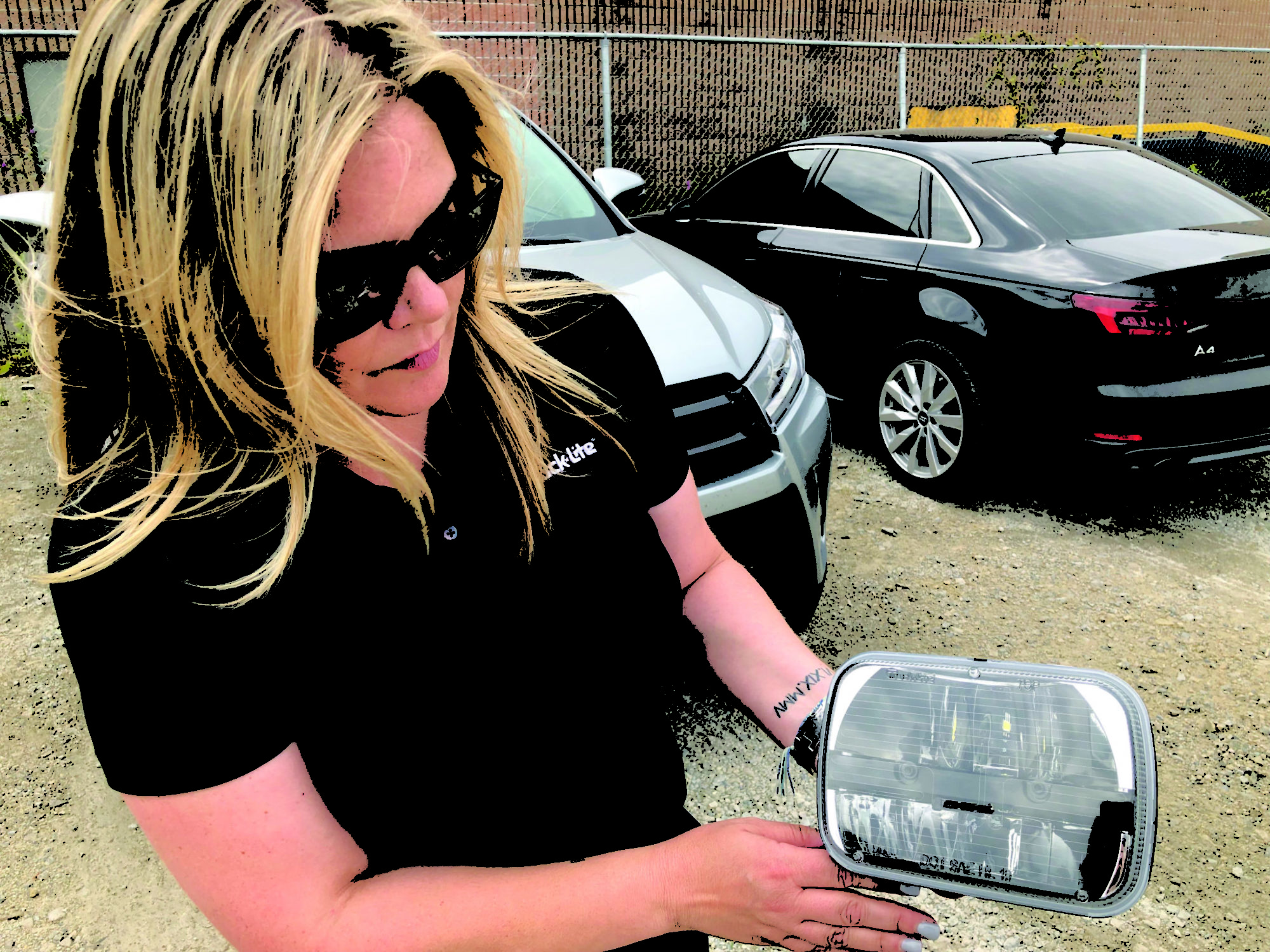 Meredith Vincent, Ontario sales rep for Truck-Lite, shows off a new headlamp that has heating coils in the glass to melt snow and ice.

TORONTO, Ont. —  Lighting issues continue to be a significant cause of out-of-service violations for commercial drivers, despite improvements in technology and reliability. During this year’s Roadcheck inspection blitz, 11.5% of vehicles placed out-of-service were done so due to lighting issues.

This despite the fact LED (light-emitting diode) lights last much longer than incandescent bulbs and are gradually taking over the market on truck and trailers. But preventive maintenance can go a long way towards ensuring lighting issues don’t place trucks and trailers out-of-service at roadside.

Keeping lights out of harm’s way

One way to ensure lights are not the culprit for an out-of-service designation at roadside is to keep them out of harm’s way in the first place.

When operating vocational trucks, there are different options for how lights are mounted to the truck. The Peterbilt Model 567, for instance, has headlights that are not contained within the fender. This makes them easier to service and replace when damaged, but does it also make them more vulnerable to damage since they extrude from the body? Ease of replacement and susceptibility to damage are two lighting considerations when buying a new truck – especially for vocational trucks that will operate within tight workspaces.

The case for LEDs

LED lighting has become a no-brainer in most applications, as prices have decreased. They draw less current than incandescent bulbs and last much longer. They also provide greater visibility and in the case of headlights, a truer, whiter, brightness.

“Incandescents are old technology,” says Meredith Vincent, regional sales manager, Ontario, for Truck-Lite. “That’s what fleets and owner-operators used forever, because that’s what was available. Now that the LED is readily available and more cost-effective, it’s lower maintenance and takes years of usage before you need to change anything.”

But to get the full advantages of an LED, as with any other component, it’s important to choose quality product. Brent Edmonson, a technician with Vision Truck Group, says the market is rife with poor-quality offshore LED lights.

“You have a nearly $1-million concrete pumper that will have crappy Chinese LEDs on it,” he says. “But there are lots of good ones out there. Grote makes LEDs right here in Kitchener-Waterloo. There’s a lot of good stuff made here in North America but they insist on putting cheap crap on, and if you get a year out of it, consider yourself lucky. LEDs can be good for 10 years, or the life of the truck – hundreds of thousands of hours – but hardly anyone, it seems, buys the good ones. It’s frustrating.” 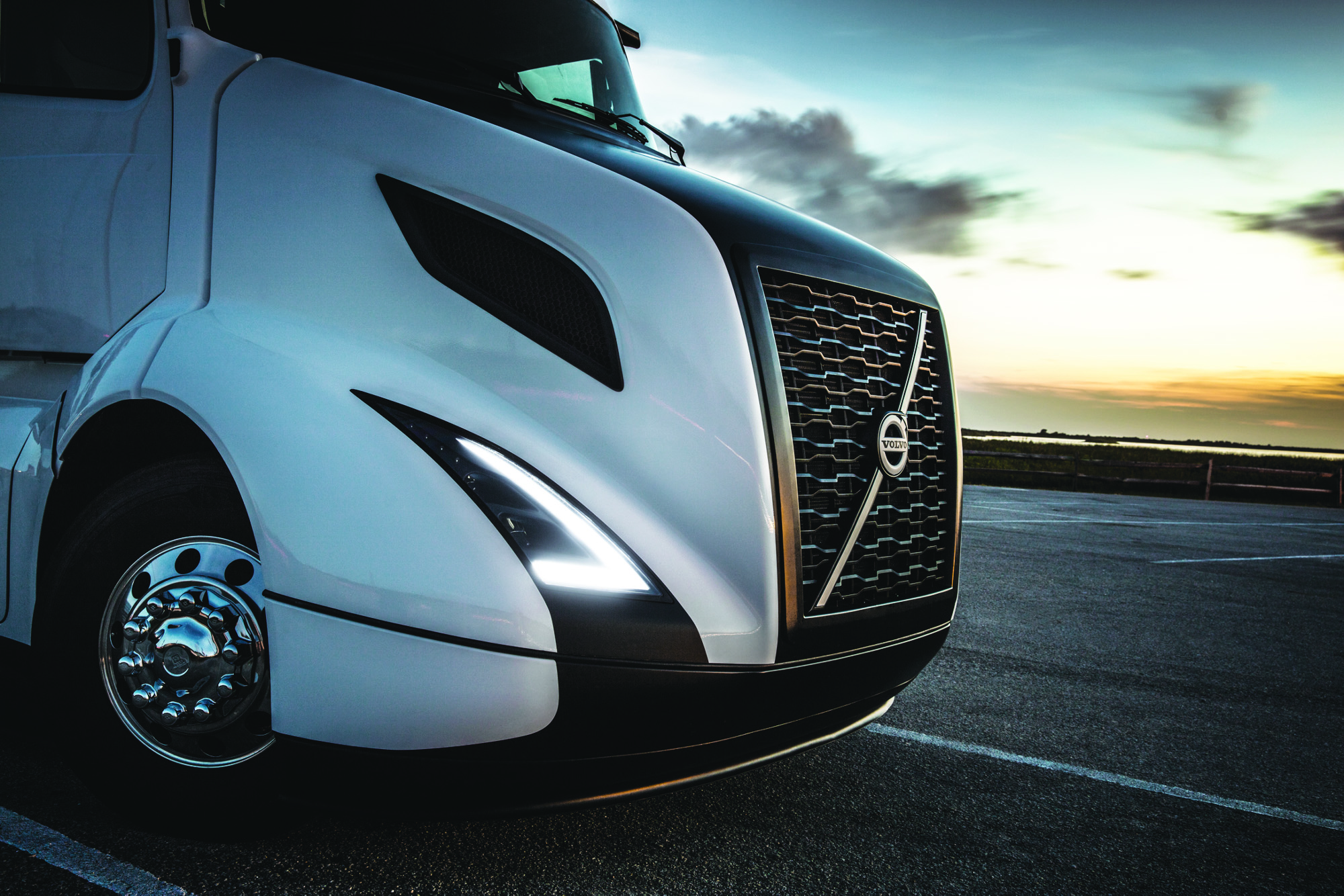 The LED headlamps on the new Volvo VNL have a fan at the rear, that blows heat to the front of the lamp when necessary to help melt snow and ice.

But can LEDs handle the cold?

One knock against LED lighting is that they don’t generate heat at the front of the lamp, leading to the possibility of snow and ice accumulation. It’s a debatable subject, but one that manufacturers have taken steps to address.

Truck-Lite has since come out with a solution of its own – an LED headlight with heating elements installed right in the glass.

“One thing I do hear that fleets and owner-operators don’t like (about LEDs) is, they don’t heat up from the front like incandescents do,” says Vincent.

She noted the diodes in an LED get very hot, and the heat needs to be drawn away in order for the light to survive. This is done through heat sinks at the rear of the light. Rather than push the warmth to the front, like Volvo does, Truck-Lite draws the heat out the rear of the light but has heating elements within the glass to melt any snow and ice.

She refers to heated LEDs as the “biggest advancement” in LED lighting at the moment.

“Everybody asks for it,” she says. “Not everybody is okay with the price increase.”

For those who aren’t willing to shell out extra money for the convenience of heated lights, she says customers should simply be diligent about keeping them wiped clean.

“If driving with halogen headlights, even though they do warm up in the front, it’s still not going to melt that much snow,” she reasons.

When taking delivery of new equipment, don’t always expect the lighting system to be road-ready. It’s a common mistake that can lead to downtime, even on equipment that just arrived from the factory. Vincent says lighting manufacturers do their best to educate trailer OEMs on the proper installation and preparation of lighting systems, but still recommends fleets inspect new equipment upon taking delivery.

“A fleet gets a brand new trailer, and sometimes they don’t do their own PDI (post-delivery inspection),” she said. “It’s important to do that, because you can look at all the connections to make sure, yes, they have been prepared with dielectric compound. If they go in dry, it makes it that much easier for contaminants to get into the connection, even if it’s a good connection. No one wants to hear that – it’s a labor cost to do that – but if the electrical system is not working, the whole vehicle is not working.”

Edmonson has had similar experiences in his own career.

Common mistakes in the shop

Since corrosion is the number one killer of lights and wiring harness connections, Vincent said it’s important to make inspecting connections and applying dielectric grease when necessary, part of the routine maintenance on a truck or trailer.

Mistakes she frequently sees in the field include not using enough dielectric compound, or using an alternative product such as brake clean, which is conductive and shouldn’t be introduced to the wiring system. When a light isn’t working, she suggests troubleshooting the electrical system before assuming the light itself is to blame.

“It could be plugged in incorrectly, or a connection could be loose. There are a lot of variables why (the light isn’t working),” she explains.

Asked what mistakes Edmonson has seen in the shop, he rhymes off “Too much electrical tape, not enough dielectric grease, and not enough shrink tube.”

It’s important to seal out moisture through proper techniques rather than slapping on electrical tape, he emphasized.

“Usually, the more electrical tape you see, the worse things are going to be. There’s usually a disaster hidden underneath the tape. Tape doesn’t seal moisture out, it really just holds it in,” he says. “You want to use shrink tube. They have to be sealed, water and air tight. You have to use dielectric grease and you have to make sure the wiring is secured and isn’t going to rub and chafe on something. You also have to keep them away from the heat of the diesel particulate filter, the exhaust, all the new emissions equipment. They’re having to do a tougher job in a worse environment.”