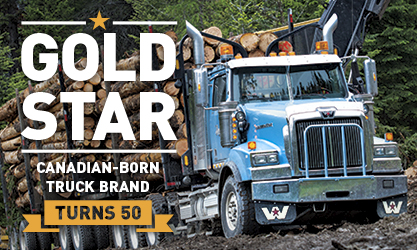 Western Star Trucks is now 50 years old, an iconic brand in Canada, if a little less so in the U.S. That difference isn’t surprising because the truck was born here when White Motor Company built a plant in Kelowna, B.C., and launched what was called the White Western Star. A tough truck, it was essentially hand-built, and if you wanted holes in the frame here as opposed to there, you had only to ask. Its initial target was the forestry world. A logging truck par excellence, as it remains, it also found favor in the oil patch and in mines.

It’s a little less customizable today, but not by too much. The venerable Model 4900 is still around, albeit with the modern Constellation cab sitting atop the Cornerstone chassis introduced in 1988.

Believe it or not, the very first Western Star itself is also still with us. Sold to a man in Seattle, Washington, it was used by three generations of his family and retired not too long ago. Bought back by the original selling dealer, the truck was restored to its virgin glory and made the trip to Arizona recently where Western Star invited the press to celebrate its anniversary. They refer to it as “Celebrating 50 Years of Legendary Awesomeness”.

In the early days, there were probably few people who would have predicted a 50-year run for the company. White was having a tough time, and by 1980 it was insolvent, which led to Volvo’s entry into the North American market. The Swedish outfit bought White’s U.S. assets but the Canadian side of the company – meaning Western Star and the Kelowna plant – went to two Alberta energy companies, Bow Valley Resources and Nova Corp. The Western Star brand stayed alive.

In 1984, the beastly 6900 off-road model was launched with its -quadruple frame rails and haul-anything-up-to-40-tons character.

The year before that an Australian enterprise was created, the Model 4900 deemed well-suited to the harsh conditions and big loads of Oz.

The company was losing money during those years, and in 1990 its Calgary-based owners sold the majority share of Western Star Trucks to Australian tycoon Terry Peabody, who was also the importer and distributor down under. Over the next decade, he turned things around in a big way. After restructuring the company’s debt, he slashed operating costs and grew annual sales to $1.8 billion in 1999 compared to just $13 million in 1992.

That growth came not just from trucks built in Kelowna but also from the purchase of Ontario’s Orion Bus Industries and the ERF truck brand in England. Peabody’s new version of Western Star also built a small military vehicle.

He cashed in when Freightliner LLC, part of DaimlerChrysler at that point, paid a reported US $670 million to buy Western Star Trucks Holdings as well as its Orion Bus Industries division in 2000. Freightliner also acquired Western Star’s 460,000-square-foot manufacturing plant in North Charleston, South Carolina, as well as the facility in Kelowna, then making 31 trucks a day. Western Star was folded into Freightliner’s Sterling Division, Orion into its specialty vehicles business.

Two years later the B.C. plant was shut down and production was moved to Portland, Oregon. Things started to move. By 2006 Western Star had built 100,000 trucks. In 2011 the 4700 model was introduced, a lighter and somewhat more versatile truck than the venerable 4900.

Now called Daimler Trucks North America, Western Star’s owners have helped it move forward, especially with the introduction in 2015 of the 5700XE. It’s a very modern highway truck that uses Daimler family mechanicals and sports fuel efficiency numbers not very far behind its stablemate, the Freightliner Cascadia. It’s built in Cleveland, North Carolina, which also handles overflow 4700 and 4900 production from the Portland factory.

As things stand now, Western Star enjoys a Class 8 market share that usually hovers just below 10% in Canada. As of February, year-to-date figures pegged its share at 8.7%, which reflects a slowdown in the oil patch but still put it ahead of Volvo and Mack. Sales are strongest in B.C., Alberta, and Quebec.

In the U.S. it’s a much different story. Year-to-Date Class 8 figures for February show a very small 2.5% market share.

Asked to explain that marked difference in a private interview, Western Star president Kelley Platt said it comes down mostly to the distribution network, not just that her trucks are a little heavier and more expensive than the competition’s. There is work to be done on the dealer network in the U.S., whereas in Canada the company enjoys a well-established and broad sales and support system. That said, she noted that market share in the northeast U.S. is in the 10% range, the same in Colorado.

Given that a third of the North American Class 8 market exists in the vocational realm, Western Star would seem to be well placed after 50 years of truck-making. A niche player at present in the on-highway world, the company’s 5700XE has clear appeal for smaller fleets looking to distinguish themselves, and that could change things in the next few years.