Yard Dogs: Equipment to keep trailers on the move 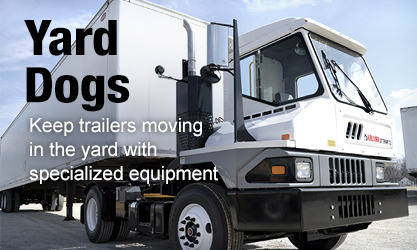 TORONTO, ON — Yard dogs, hostlers, terminal tractors, shunt trucks … they are known by a variety of names, but serve a single purpose. Moving trailers around. They are common at distribution centers, marine terminals, and rail heads, and they are often used by larger carriers with cross-docking facilities and Less Than Truckload operations. They are not so common at smaller carriers, but mandated Electronic Logging Devices could change that.

If your fleet is running close to ­capacity, pulling a driver off a dispatch to move a few trailers around the yard could cause problems later in the week. If you’re using a road tractor to spot trailers, failing to log in as an unassigned yard move, or failing to log out after the move, could cause problems for that truck’s driver somewhere downstream. Electronic Logging Devices will force fleets to account for every move by a tractor and driver. Having a means to move trailers around without having to worry about the consequences might be enough reason to consider a shunt truck.

According to Jeff Larson, vice president and general manager of Vancouver-based Masonlift, if you’re making 10 or more trailer moves per day around your facility, it might be time to think about a yard truck. Masonlift supplies all manner of material handling equipment including Ottawa yard trucks.

“Two things to think about are employee safety and productivity,” he says. “If you use a road truck, you’re asking the driver to possibly get out and hook up the air lines and crank the landing dollies. There’s some risk in that activity, and when it comes to produc-
tivity, you can do the move much faster with a purpose-built truck.”

Shunt trucks can be spec’d to suit the operation, from heavy-lift 24/7 operation to a lighter-duty model to suit smaller operations. Larsen says each customer request is vetted, and the correct spec’ is then established.

“We consider factors like the yard surface, grades the truck might encounter, how heavy the trailers are, and what type of duty cycle is required,” he says. “Most truck terminals and distribution centers are fairly flat, but in Vancouver, for example, we have to consider the tidal drop for our marine units that are operating on and off marine vessels.”

Used yard trucks are an option, too. The trucks will last 20 years or more, but the older the truck, the higher the maintenance costs. And trucks built to earlier emissions standards are in short supply. Current off-road diesel engines, such as those those found in newer trucks, must be built to the Environmental Protection Agency’s (and Environment Canada’s) Tier 4 emissions standards.

“Some fleets are very concerned about their environmental profile and are doing all they can to green up their operations, like buying the Tier 4 trucks,” says Larsen. “Other fleets concerned about operating cost and reliability will go new as well. Small light-duty operations will get by just fine with a used truck.”

Your choice of power will likely be diesel, but in 2017 there are alternatives and good reasons to look at alternatives. Tier 4 is less rigorous than EPA’s GHG 17 rules for on-road trucks, but the off-road emissions rules do add cost and complexity to what used to be a relatively simple and reliable engine.

“Early Tier 4 engines had their share of problems, and regens were one of the worst,” says Larsen. “Usually, when you had a warning light, you’d just flick the switch and go for lunch. But if the ­operator ignored the light, the ­system plugged up, and off it went for an ­expensive repair.”

Smaller engines under Tier 4 do not require Diesel Particulate Filters, but they do have Diesel Oxidation Catalysts and Selective Catalytic Reduction, which requires Diesel Exhaust Fluid. To get around the hassles and expense associated with Tier 4 engines, some yard tractor manufacturers went to gasoline engines, but those lacked the torque to get the job done. So, the operator’s choices were limited to an old diesel yard tractor with its associated maintenance and repair headaches, or a new tractor, with the emissions-related challenges.

Enter the electric yard tractor. In what would seem to be a perfect application for an electric powertrain, several manufacturers are now producing electric yard trucks, including BYD Heavy Industries of Los Angeles, California, and Orange EV of Riverside, Missouri. Such trucks certainly do not require emissions equipment, and in many cases could qualify for government incentives for environmentally friendly vehicles. But do they work?

These trucks are almost exactly the same as a diesel yard truck except for the powertrain. They are apparently as capable as any diesel-powered hostler, but produce zero on-site emissions. Mike Saxton, Orange EV’s Chief Commercial Officer, says electric yard trucks are the future.

“Battery technology is such that we can build a cost-effective electric truck at cost parity with diesel, but without the high energy and maintenance costs,” he says. “Instead of doing a regen during a lunch break, you plug the truck in.”

Orange EV trucks are configured for customer requirements, loads, and duty cycles, and the electrical systems are ­tailored for the use they will see.

“When our T-series truck is configured as an extended-duty truck, we use a 160 kW-hour battery pack,” he said. “We try to match the charging rates to the customers’ duty cycles and usage patterns, and we can configure a charging schedule based on shift schedules, etc., so we can spec’ and quote the truck that works best for them.”

They are available with a four-hour or two-hour fast-charge as well, which shortens the time between charges and gets the unit back into service sooner. It also can be charged during lunch and coffee breaks to extend operating times.

Cold weather is a factor when designing the battery system, but Saxton says they build in some extra battery capacity for cold conditions.

“We have several customers in Chicago and New York where cold is a factor, and the trucks are proving to be more reliable than their old diesels,” says Saxton. “They never gel up. They always start.”

Whether it’s the inconvenience of waiting for your shunt service to arrive and move a few trailers around the yard, or concern of the value of your road ­drivers’ time, having a shunt truck on the property can make sense. And with the various incentive programs in place or coming soon, going electric could become more affordable.

Take your trailer for a walk

Justifying the upfront cost and the ongoing maintenance costs of a full yard tractor can be daunting if the volume of trailer moves just isn’t there, but relying on drivers to spot a trailer can be awkward, too. Qualified people might not be around when you need them. Enter the Trailer Caddy Terminal Tractor from DJ Products of Little Falls, Minnesota. It’s a walk-behind electric trailer mover that comes at a fraction of the cost of yard truck and can be operated by anyone on staff with a little training.

Repair and maintenance shops, expanding truck fleets, and even small distribution businesses will run into situations where they need a trailer spotted or moved into or out of a bay. Traditionally, such operations rely on old, decommissioned road ­tractors, but those require maintenance and aren’t always reliable. When you ­consider the ­carrying costs of such equipment, a low-maintenance and easy-to-operate yard ­spotter can be a pretty appealing alternative.

“It really comes down the number of trailers you have to move in a day,” says DJ Products sales engineer Dawn Felker. “If you’re moving 10 or more trailers, you ­probably have your own truck or you contract with a shunting service. But small-­volume operations can have a Trailer Caddy on standby all day long for about a ­quarter of the cost of a yard truck, and anyone can operate it.”

Trailer Caddys are electric and they plug into a 120-volt source, so no special ­electrical connections are required. They are rated up to 100,000 pounds, so even a loaded quad-axle trailer isn’t too much to move.

Felker says the units are built in Minnesota, so they were designed with snow and cold in mind. “As long as you keep it plugged in, the batteries won’t be left short in the cold,” she says. “And they can handle a little snow. Not two-foot drifts, mind you, but a couple of inches aren’t a problem.”

Required maintenance on the unit is minimal, and no special training is required. Anyone in the shop can probably take care of it. And best of all, anyone can operate a Trailer Caddy. When you need a trailer pulled away from a door, the forklift operator can do it. No more waiting, no more tied up doors.