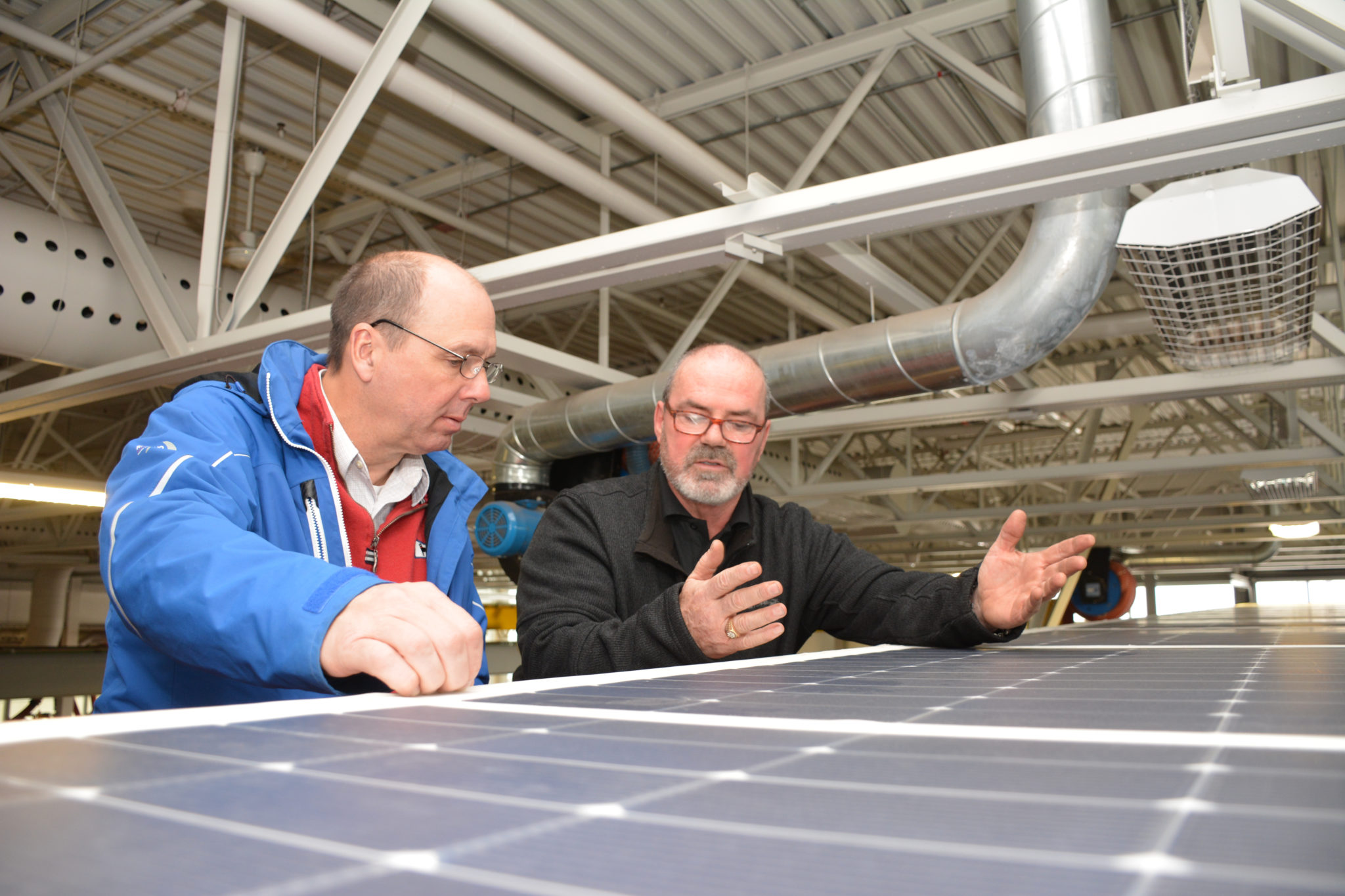 STONEY CREEK, Ont. – Loblaw is looking skyward in the bid to electrify its private fleet, testing a trailer equipped with a rooftop solar array designed by Westhill Innovation. And if the prototype works as expected, the reefer will never sip so much as a drop of diesel.

“Think of all the rooftop that’s available for trailers,” says Wayne Scott, Loblaw’s senior director – transport maintenance. “A few people in the U.S. were trying it… We thought, ‘Why not support a Canadian company, local people and innovation?”

This particular system will support a Carrier Vector 8500 refrigeration unit, which is traditionally powered by a diesel engine or by plugging into the wall at a distribution center. But instead of plugging into a wall, it will now tap into 440 sq.ft. of solar panels on the trailer roof.

“The reefer unit thinks we’re the grid,” explains Vern Sherwood, Westhill’s director – energy systems and solar, wind, battery technology specialist. As a truck drives down the road under sunny skies, the reefer will draw power from the solar system’s lithium-ion batteries. The generator won’t need to run. If it turns cloudy for a couple of days, the batteries will still supply the power.

Work on the system began in January 2017, and it was developed with the requirements of trailer manufacturers in mind, says Gina Succi, president of Westhill Innovation, based in Simcoe, Ont. While the version being tested by Loblaw has been retrofitted to an existing trailer, it’s actually designed to replace the roof and be installed at a factory within 45 minutes.

Loblaw is no stranger to solar-powered arrays, of course. Its truck sleepers are equipped with 300-watt systems that double the run time of battery-powered auxiliary power units to support hotel loads. “Now every day going in, [drivers are] not worried about someone leaving a microwave or something else plugged in to kill the batteries. They get in and it’s fully charged, all the time and every time,” Scott says.

But the difference in Westhill’s solar system is not limited to size alone.

“There’s plenty of guys who’ve tried to put a solar cell on a roof, but none of them have a solar cell that’s indestructible like ours. You can shoot holes in the roof and the cell is going to work,” Sherwood says as an example. The honeycomb pattern of wires ensures there is another path for the power if a connection is broken. “You can go up there and walk on it and beat it up and do whatever you need to do.”

The solar panel’s wiring has been laminated into the solar array itself, using lessons that Westhill Innovation has learned by producing composite trailer panels. 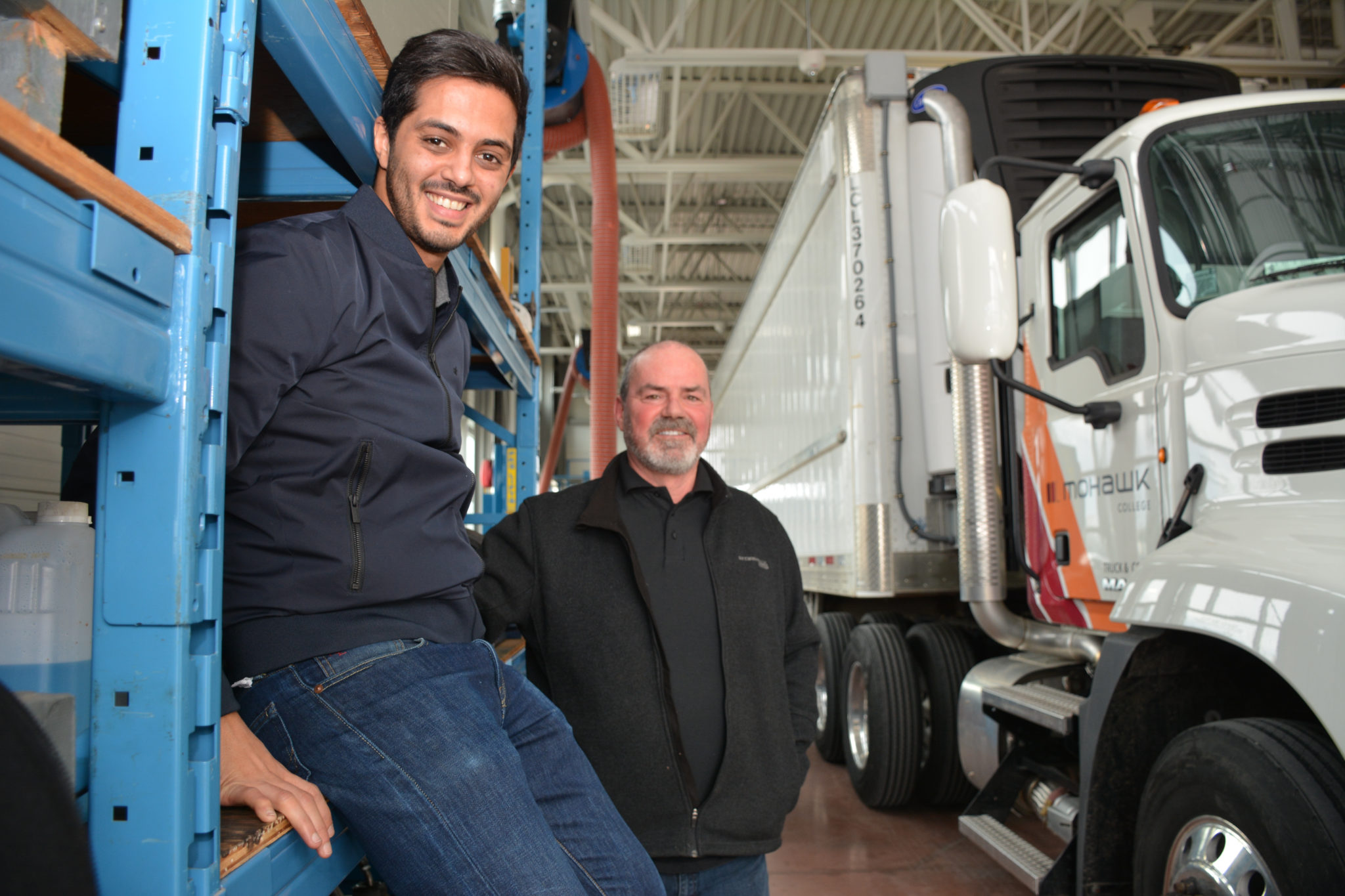 Mohammed Alissawi and Vern Sherwood of Westhill Innovation say the system could be right-sized for other uses.

Solar power sized for the need

The prototype’s solar roof weighs in at about 700 lb., but the goal is to have an entire system that adds about 300 to 400 lb. to a trailer’s weight once a reefer’s diesel generator and fuel tank are removed. Systems could also be right-sized to specific needs, such as powering lift gates.

The reefer would traditionally consume a US gallon of diesel per hour, adds Mohammed Alissawi, Westhill’s renewable energy engineer, who began working on the project as the member of a team at McMaster University. “Our solar panels and our batteries are sized in such a way that, if a customer needs to operate for eight hours, then we size the equipment to give him what he needs.”

It is indeed a system. While the massive solar array is the most visible change, a related power management system makes it all possible. A series of inverters, batteries and chargers step the power from 48-volt DC power to 120 VAC, 208-volt three-phase power, and ultimately 460 VAC three-phase power.

That’s what fools the refrigeration unit into thinking it’s connected to the grid, Sherwood says. “Going to three-phase [power] is the leading edge of remote power systems.”

“If you plug it into the wall, the wall is powering the load and charging the batteries. If you unplug from the wall, the auto transfer switch flips over and [the system] runs off the batteries and the inverter.” And with 20 kW of lithium-ion batteries, the system will run without any sun for an entire day.

The power of lithium-ion batteries

The prototype itself was assembled at Mohawk College in Stoney Creek, Ont., which also supported the project with a renewable energy load test bank, Sherwood says.

While this unit will test how well solar power can support a reefer, imagine what could be done by plugging 10 to 20 trailers into a grid, helping to charge battery-electric trucks, Scott says.

The first trailer is to be tested for three to four months, while Westhill hopes to establish a small test fleet of 30 to 50 trailers in the short term.

The rooftop solar array is only part of the equation. A sophisticated power distribution system fools the reefer into thinking it’s plugged into a supply of shore power.