GREENSBORO, NC — Defenses are said to win championships, and Mack Trucks is leaning on one of the top defensive players in football as it prepares to make gains in the truck market. 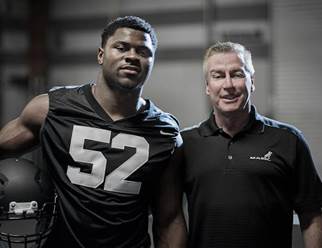 The manufacturer has announced a sponsorship agreement with Oakland Raiders defensive end Khalil Mack, the 2016 NFL Defensive Player of the Year, as it promotes a new truck to be unveiled September 13.

“To hear my dad talking about Mack Trucks, it always stood out to us and made us feel like we was connected to something important, something bigger than ourselves,” he says in a related video. “Every time I’m on that field it’s just a part of my thought process. I’m like a Mack Truck running through whoever is in front of me.”

“This partnership makes sense on a number of levels,” said John Walsh, vice president – global marketing and brand management for Mack Trucks. “We obviously share the same name, but what really brought us together was shared values – the fundamentally American values of hard work, honesty and humility. In fact, he reached out to us at the same time that we were talking about reaching out to him.”

The idea came about after the NBA’s Draymond Green of the Golden State Warriors texted his All-Pro friend.

Mack was lightly recruited out of high school, and secured his college-level experience at the University of Buffalo. But in 2013 he was the Mid-American Conference Defensive Player of the Year, setting NCAA records for tackles for a loss and forced fumbles. Oakland picked him as the fifth player overall in the 2014 draft. And he was the first player to be named in two positions on the 2015 Associated Press All-Pro Team.