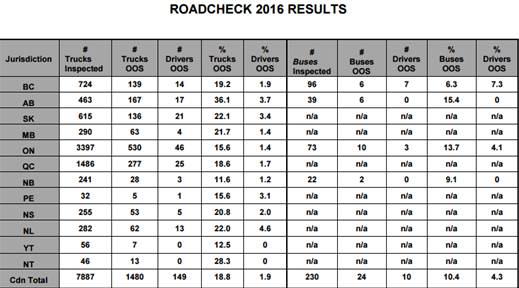 OTTAWA, ON – Canada’s International Roadcheck 2016 results show that Alberta had the highest percentage of trucks placed out of service during the three-day June blitz, while New Brunswick earned top honors for the lowest percentage.

The results released by the Canadian Council of Motor Transport Administrators (CCMTA) reveal that, as a whole, Canada had an average of 81.2% of trucks pass inspection by the Commercial Vehicle Safety Alliance, which operated the blitz over 146 sites across Canada from June 7 – 9.

Brake system defects and brake adjustment issues accounted for 46% of out-of-service violations during the blitz, leaving much room for improvement, yet remaining in line with recent years. The special emphasis for International Roadcheck 2016 was tire safety.

In New Brunswick, 241 trucks were inspected, and 28 were placed out of service, creating an out-of-service average of just 11.6% for the blitz, the lowest in Canada.

“The safety of everyone traveling our roads here in New Brunswick is important, and the trucking industry has a big role to play,” said Justice and Public Safety Minister Denis Landry. “While there will always be room for improvement, it is encouraging to see our safety and compliance rates continue to improve, making New Brunswick a safer and better place to live and raise a family.”

In Alberta, 463 trucks were inspected, and 167 were placed out of service, creating an out-of-service average of 36.1%, the highest in Canada.

For Ontario, where nearly 3,400 trucks were inspected, 530 were placed out of service, which led to a provincial average of 15.6%.

U.S. data from the blitz is expected to be available in September, according to CVSA.