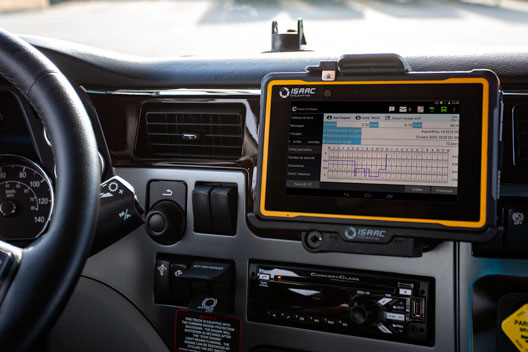 While Canadian and U.S. ELD standards will be similar, fleets can expect some differences on this side of the border.

TORONTO, Ont. — Canadian fleets that don’t operate in the U.S. still have the option of running electronic or paper logs. Some fleets may already use ELDs (electronic logging devices), while others may be using AOBRDs (automatic on-board recording devices) or something in between.

Since Canada really had no technical standards for such devices prior to this June, almost anything that recorded driving time, miles, and on- and off-duty time could pass as an electronic log.

That all changed when the federal government announced that it would require federally regulated carriers to use ELDs as of June 2021, giving the industry two years to prepare. All provinces and territories will need to integrate the rules into their own regulations, too. And much has to happen in the months to come.

“I believe most of the provinces and territories will eventually implement the rules,” says Mike Millian, head of the Private Motor Truck Council of Canada. “However, I am betting most will be slightly further out than the federal rule date, and there may be some slight variations.”

The first hurdle will be getting the devices on the market. Canada will require any device to be certified by a third party. That will avoid much of the confusion and uncertainty American fleets experienced in selecting ELD providers. The U.S. Federal Motor Carrier Safety Administration (FMCSA) relied on vendors to self-certify their devices.

As we have since discovered, more than a few of the listed devices don’t comply with the rules. Carriers that purchased such devices may still not be aware of the problem at this late stage of the game, and could face the prospect of having to replace the non-compliant equipment with devices that meet the technical standard.

While requiring certification is a good idea, the clock is ticking. As of August, Transport Canada has yet to name the parties that will be responsible for certifying the ELDs.

“The application process for accreditation of certifying bodies is not fully defined yet,” says Adime Bonsi, a researcher at FPInnovations, parent company of the PIT Group. “The Transport Canada literature suggests the accreditation and certification process will take about a year. PIT Group has been providing independent verification services to U.S. vendors for the past few years. Our experience so far suggests it takes about three to six weeks to thoroughly test and verify that a device is compliant with FMCSA’s technical specifications.”

Bonsi says he expects there will ultimately be far fewer brands and models available in Canada than are currently offered in the U.S. — presently somewhere close to 450 products — so that should cut down the number of devices that will have to be certified. Still, he says it could be about 12 months until we see the first certified devices appear on the Transport Canada website.

“Third-party certification will limit the number of suppliers, however I think that is for the better,” says Millian. “In order for the rule to be effective we must be able to verify the devices tracking the drivers are compliant, otherwise we are no further ahead.”

Vendors will have about a year to integrate the Canadian hours of service rules into their devices before they are submitted for certification. In other words, some carriers could face some uncertainty over whether devices they are currently using will be approved in Canada by the June 2021 deadline.

With FMCSA about to update its hours of service rules, ELD vendors could have their hands full dealing with updates and revisions to the U.S. software once the new rules are officially adopted. Carriers operating in Canada would be well advised to get their ELD suppliers to ensure that they intend to meet the Canadian compliance date.

“All existing ELDs and AOBRDs that can be updated to ELD status will have to be submitted for certification in Canada,” stresses Jean-Sebastien Bouchard, vice-president of sales at Isaac Instruments, a Canadian ELD and telematics supplier. “Self-certification will not apply in Canada, and Canadian enforcement officials will verify that each ELD they encounter at roadside is on the certified list.”

While Canada worked hard to harmonize its rule with the U.S. rule and technical standards, there are necessary differences. For obvious reasons, Canada’s ELD rules will reflect the Canadian hours of service rules.

ELD vendors will need to ensure that existing devices can be upgraded to meet the Canadian rules, including provisions like off-duty time deferral, changes in a driver’s chosen duty cycle, the North of 60 provisions, etc. These provisions affect the recording, processing and reporting of the driver’s record of duty status. There are also provisions in Canadian technical spec’s to use handheld devices, which may not be sync’d at all times with the vehicle’s electronic control module.

Handheld devices can omit some data elements when there’s no connection to the ECM, or when the ELD is not sync’d within a certain period of time, such as when a driver carrying the device goes out of Bluetooth range. If the driver doesn’t log out, the ELD will generate error messages, but the standard accounts for that scenario. In most cases, the truck won’t be moving, and those data elements will not be critical to determine compliance. But when the vehicle is moving, the device must be sync’d with the truck.

As for transferring data during a roadside inspection, Canada will not be using the web-based e-RODS (electronic record of duty status) files used in the U.S. We have been told that e-RODS may come at some later date, but will not be required in the initial Canadian ELD roll-out.

In the meantime, Canada will require the device to generate an electronic file, which includes a non-editable .pdf of what the inspection officer sees during a roadside inspection, and a data output file. To comply, the ELD must be able to email the file and a unique identifier to an address specified by the enforcement official. The log data can also be transferred to the officer via a Bluetooth connection or physical USB-2 device. The latter two methods are optional and not required for certification.

“Because there are vast swaths of Canada where cellular service or WiFi is simply not available, Transport Canada allows the data transfer to take place at a later point in time when the service is available, or to be carried out some other way, such as Bluetooth or USB 2,” says Bouchard. “At the very least, the device must be able to display the current and previous daily logs and connect to a central email portal using a unique identifier.”

These are vendor issues, not something carriers will have to worry about. There may, however, be some additional training required to familiarize drivers with Canada’s data transfer requirements.

Among the other differences between our prescribed ELD requirements and the current U.S. requirements are things like the Summary of Driver Hours. Canadian ELDs are required to display available driver hours — on the current shift and in the seven- or 14-day recap. This will become complicated when some of the special provisions such as the off-duty deferral are considered.

Then there are differences in the rules that apply to personal conveyance. While the U.S. does not specify a maximum distance that can be driven as a personal conveyance (while meeting certain criteria), Canada imposes a 75-km limit. The Canadian ELD must automatically switch back to driving if the 75-km limit is exceeded. Additionally, U.S. regs require the ELD to omit certain data parameters to protect driver privacy while under personal conveyance. Canada always requires the full data set to be recorded.

Many of the devices currently on the market already offer some or most of the features required by Canada. The transition is not expected to pose too many difficulties for most vendors. Some, however, may decide the Canadian market is too small to warrant the investment in “Canadianizing” their ELD product and may simply not offer product here.

Fleets should consult with their vendors early to see where they stand, leaving enough time to make an alternate choice if the preferred product isn’t available. Twenty-one months isn’t much time to select a new ELD and begin the integrating and training processes.