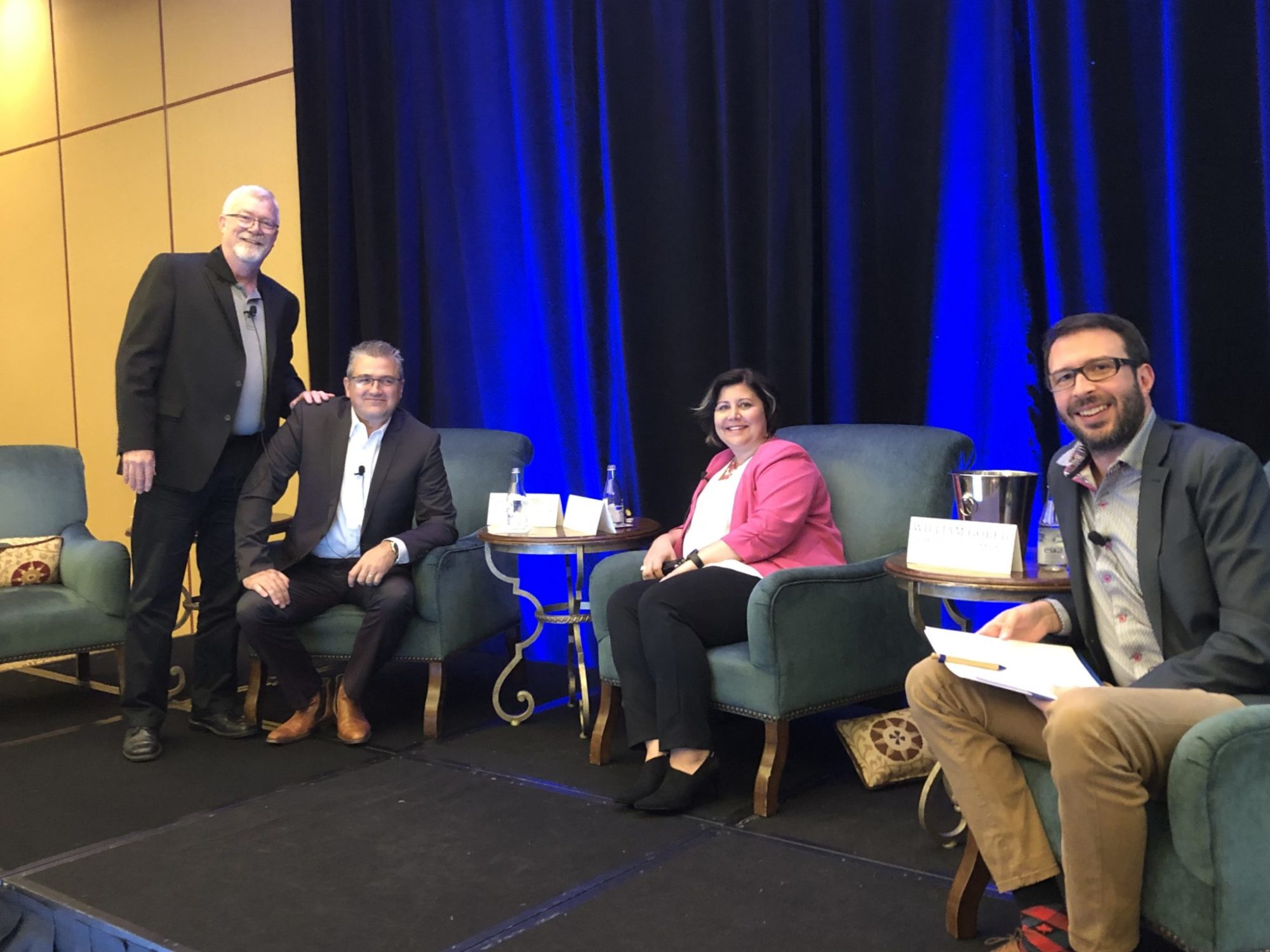 Don Mooore of the CTEA, the moderator, is joined by David Tremblay, Lesley Love, and William Gobeil.

TREMBLANT, Que. – Simard Suspension is clearly a significant employer in Baie-St-Paul in Charlevoix, a tourist town with a population of 7,000 people about an hour northeast of Quebec City.

But it still struggles to find employees.

“Machinist is not a very popular profession these days with the new generation,” company president David Tremblay said during a Canadian Transportation Equipment Association panel on immigration strategies.

“Forestry was the main industry in our region a few years ago and, in the ‘90s, it was pretty common to find people from forestry looking for a new career in a shop like ours. It was pretty common also to find teenagers playing with dirt bikes, doing their own repairs, and find farm boys like myself looking for a job as a mechanic, a welder, or a machinist. But not anymore.”

The region simply doesn’t require all the talent that it needs.

It’s why Simard started working with trade schools and established programs including working sessions in its shops. “It was a good collaboration for many years, but it was focusing on welding.” People were needed on the assembly line, too.

A program that focused on assembly techniques and mechanical manufacturing helped the company grow to 225 employees that work there today. But once you have attracted all of a region’s people interested in your jobs, you have to extend the reach of your recruiting efforts.

“It became very difficult to attract people from bigger cities like Montreal and Quebec City and ask them to move for the same salary, and sometimes less depending what we can offer. We needed other sources to provide us with the manpower,” Tremblay said.

That’s when immigration was identified as part of the solution.

“There is different way to bring people in, but generally what you are doing is right,” said Lesley Love, an immigration lawyer at Gowling Lafleur Henderson. “You have to start working locally, that is what the government wants to see before you go oversees.”

Identifying the ideal candidates overseas involves looking at factors ranging from their background to education, Love said. Even then, bringing a foreign worker into the workplace is not an easy task.

“Government is very reactionary. It’s hard to bring people to Canada. If you’ve done everything possible and there is still nobody in Canada to fill the role, you have to send applications for foreign workers and be very specific about what they are going to do.”

In Quebec, the immigration channels involve Service Canada and the provincial immigration ministry.

“You have to prove you did everything you could, and on top of that, Quebec asks who is that worker and is he qualified for Quebec,” says William Gobeil, director of international mobility at RM Recrutement.

“It takes longer, and it is more complicated [at] first, but once it’s started, it’s easier. For example, getting permanent residency is way faster and easier for the worker and the employer in Quebec.”

But verifying the credentials of a prospective worker varies substantially depending on their country of origin, he adds.

“If you go to Europe, it’s probably easier to find out if what is said on the resume is real. But it can be very tricky in some parts of the world like Africa. It might be difficult to validate is the experience on a resume is for real. We are not there and we don’t share the same cultural background.”

Sometimes, it just doesn’t make sense to bring people from a bigger city or a foreign country into a smaller region like Charlevoix, Tremblay said. “You need to make sure that there is a fit between the worker, your company, and the community you are living in. The key is adaptation.”

On that side, Simard Suspension seems to be doing a pretty good job. It has hired six employees from Mexico and an equal number from Columbia. Another dozen will soon come from the Philippines.

As for the retention?