Syrian driver in waiting: “I don’t want to be idle” 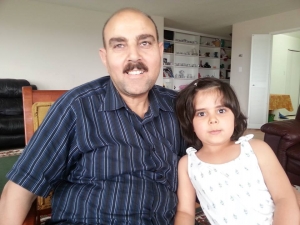 TORONTO, ON — Truck driver Ahmad Al Rasoul knew it was time to leave Syria the day the bedroom where his two-year-old son Joseph was sleeping got destroyed by a bomb. Miraculously, young Joseph remained unscathed, albeit covered in ashes.

Rasoul, 46 at the time, and his wife Rasmia Al Mekhlef, had four other children and lived in Homs, a community badly wracked by the Syrian civil war.  You’ve probably seen the skeletal remains of Homs buildings on the news.

Since he got his licence at 22, Rasoul had been a truck driver and loves the work. He hauled goods around Syria, Saudi Arabia, Qatar and other Middle East countries in a variety of rigs, most recently a Mercedes Actros with a double bunk, microwave, TV and air conditioning, though sometimes the AC was overwhelmed by the desert sun.  Those afternoons, he says, he would pull over at a mosque and have a nap. His only driving offence, he says, was a speeding ticket in Saudi Arabia. The speed limit was 80 kilometers per hour. He was nabbed for going 81.  “There are cameras everywhere and they are very strict there,” he says.

Some trips would be away from home for up to 15 days at a time, but he says, “I lived like a king.”

Rasoul, now living in an apartment in Toronto, spoke with Today’s Trucking through an interpreter.

The day after the bomb hit, the family piled into his cousin’s sedan and moved to a rural part of the country, eventually seeking refugee status in Lebanon. There, Rasoul landed part-time work as a dump truck driver, but the hours were few. Mostly, he fed his family by picking olives.

“Every day you had to fight to survive,” he says.

The family stayed in Lebanon three years until a phone call came from the United Nations, asking if he and the family-by this time one daughter bigger-wanted to move to Canada. “I thought, ‘Are you kidding me?'” And thus Rasoul was part of the first wave of the 25,000 Syrian refugees Canada welcomed.

As recently as mid-June, when he spoke to Today’s Trucking, Rasoul was attending English-language classes but still not working.  He wants to drive truck. Like he did before.

Unfortunately for him there is no way to prove that he has truck driving experience, so he must start fresh, as if he had never driven anything before. In Ontario, that means going through the graduated licensing system.

The first step is a written test, which can earn you a G1 licence. With a G1, you can drive only with another licensed driver in the vehicle. Step two is a road-test, which can yield a G2 licence. A G2 lets you drive alone but with some restrictions and not commercially. And if you’re a first-time driver-or a refugee with no documentary evidence of your history because your home city has been destroyed-you must wait a full year before trying for the full licence. Exceptions can be made and the year-long waiting period foregone, for refugees who can deliver proof of previous experience.

Rasoul’s waiting period ends in mid-July. That means he can obtain his full car licence. But ever since July 1, because of Ontario’s new Mandatory Entry Level Training regime, everybody who wants to obtain a truck-driving licence must undergo a minimum of 103.5 hours of training with a private career college registered with the Ministry of Advanced Education and Skills Development, an Ontario College of Applied Arts and Technology, or recognized authorities like carriers with training programs under the Ontario Ministry of Transportation’s Driver Certification Program.

So if Rasoul had proof of his previous experience, he would probably be driving professionally now.  As it is, he remains determined to find a carrier willing to help him with the training, or better yet, somebody who will hire him to work around the shop while he completes the mandatory schooling.

“My family is grateful to Canada. But I don’t want to be idle,” he said. “I just want to start working and support my family as soon as possible.”

In the meantime, a Canadian volunteer who met Rasoul in Canada is trying to get Ontario’s one-year graduated-licence rule changed.

Omar Khan, a volunteer with a refugee-assistance program called The Together Project, has challenged the one-year barrier by taking it to the Ontario Human Rights Commission.  “Ontario’s the only province like this,” observed Khan, a computer engineer. “And we’re not saying to give these people a licence. We just want them to be able to take the test.

“If you aren’t a refugee or have some access to an embassy, you don’t need to wait this one year. You can just get a stamp from your embassy saying the licence you have is valid. We think this policy amounts to discrimination.”

Khan has challenged the Province of Ontario to produce some empirical proof that the one-year waiting period has some measurable affect on safety. The Human Rights Commission will hear the case on November 28 and 29 of this year.

“The thing is, Ahmad’s just one driver but there are tons more like him. And I hear there’s a shortage of truck drivers,” Khan says. “Wouldn’t it make sense that the companies who need drivers would want to see this rule changed?”