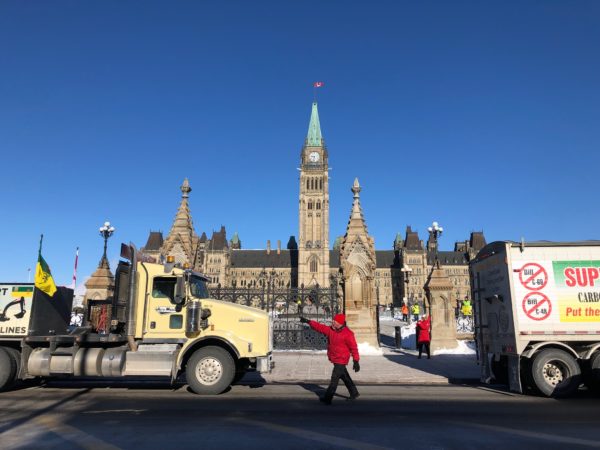 The United We Roll Convoy for Canada wanted to make some noise, and this morning it did that very thing as it rolled up to Parliament Hill. About two dozen commercial vehicles and twice as many pickups — many of which began their journey in Red Deer, Alta. – completed the final leg in a five-day journey, announcing their arrival with the blast of horns.

CALGARY, Alta. — Trucks have become a symbol of support for Canada’s ailing oil and gas sector, with several convoys rolling through Western Canada in recent months. Now some are preparing to take their arguments eastward, with United We Roll! […] 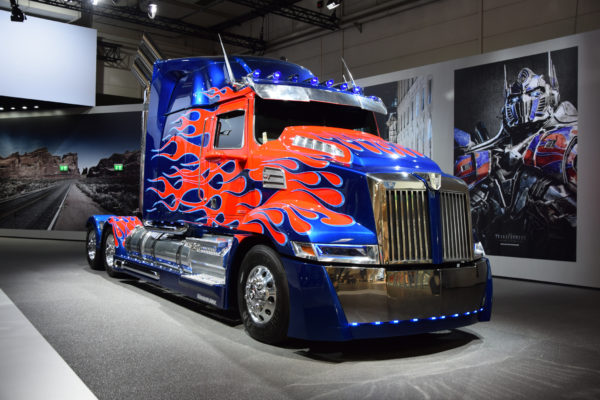 Big rigs belong on the big screen. Comedies, thrillers, action movies, documentaries … trucks have been a part of cinema virtually from the start. Whether they’re turning into giant robots, plowing through barricades, or helping the Bandit, they’ve been a mainstay in low-budget B movies and summer blockbusters alike. So buckle up and let’s revisit 50 of the most memorable truck scenes in movie history 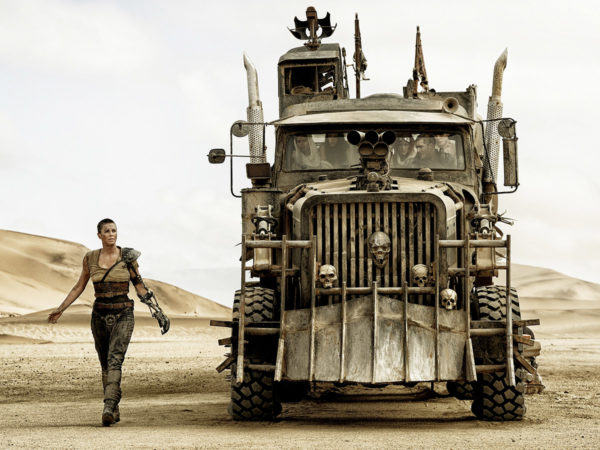 TORONTO, ON — Action heroes. Comic relief. Horror movie villains. Hollywood has long loved the lore of truckers, giving us some memorable characters through the decades. And while they weren’t all in classic movies, they made their mark in other ways.

From the freaky to the supremely funny, here’s our list of the 50 greatest truckers in movie history: 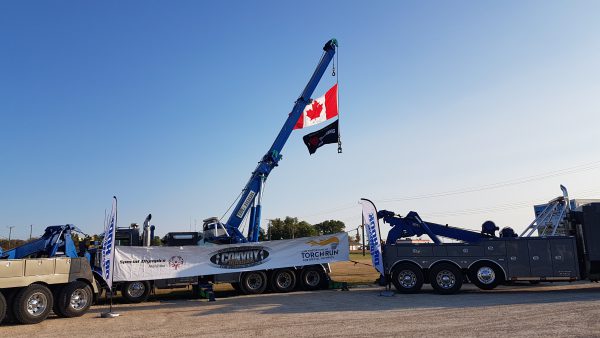 WINNIPEG, MB — How do you raise tens of thousands of dollars in a single day for a group of people who really need support? You get truckers involved!

Kane’s family reported the elder Kane, 84, passed away peacefully in his home July 16 after a brave battle with cancer.

Len’s Transportation and the Kane family are inviting those that knew him to participate in a Heavy Truck Funeral Convoy, followed by a celebration of life at the Sandman Signature Hotel, on July 29. The convoy will begin at 3 p.m. pst leaving from the Ranger Transport yard in Surrey, B.C.

STOUFFVILLE, ON – Don Anderson loved trucks, and almost 100 trucks representing friends — and even some of his competitors — took a trip down Highway 404 on Saturday morning in a fitting tribute to his legacy. 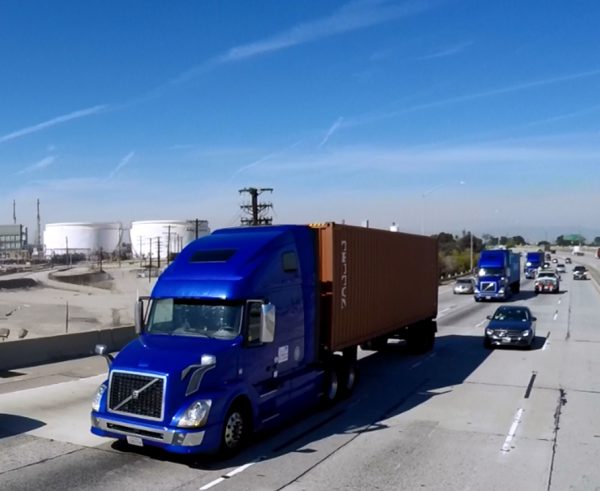 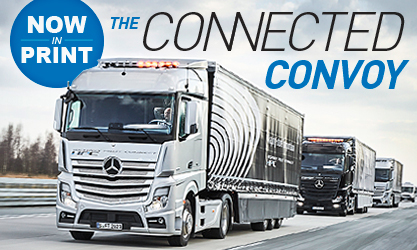 The rise of autonomous vehicles

This year marked major milestones in the push toward autonomous vehicles. Freightliner unveiled a truck that could drive itself in Nevada. Platoons of trucks from DAF, Iveco, MAN, Scania, Volvo and Daimler made their tightly packed trips to Rotterdam in the Netherlands. A self-driving truck made possible by Otto delivered a load of beer to Colorado Springs. And Canada’s first autonomous truck is part of a Suncor trial in Alberta’s oil patch. Stay tuned for more. The march of technology continues.

WINNIPEG, MB – As similar convoys rolled out in Canadian cities like Toronto and Saskatchewan, The World’s Largest Truck Convoy for Special Olympics rolled around Winnipeg’s Perimeter 192 strong on Saturday morning.

Manitoba has 1,700 special athletes participating in 18 sports, and seven of those athletes are going to the upcoming World Championships. They’ll be competing in snowshoeing, hockey and downhill skiing. The Convoy is the main fundraiser for these athletes to afford to compete in their various events. Well over $60,000 was raised today by the people of Manitoba. 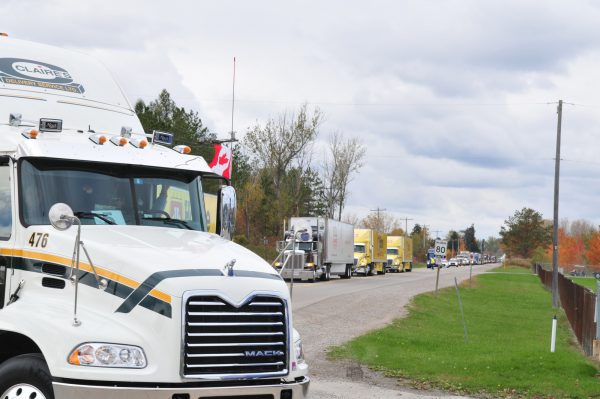 PARIS, ON — The Southern Ontario chapter of the World’s Largest Truck Convoy for Special Olympics ran in Paris, ON the weekend of Oct. 17 when a total of 69 trucks made the 100 km loop from Paris to Ingersoll and back, raising $52,000 through pledges and sponsorships.

This was the Paris Convoy’s 11th year. Total donations to Special Olympics from this one source topped $580,000 with this year’s tally.

Each year a few dozen such events take place in cities across North America, including five in Canada, raising hundreds of thousands of dollars to aid Special Olympics athletes in their quest for self-fulfillment and maybe even a few medals at sporting events.

The Paris Convoy ran a month late this year due to some organizing challenges. In fact, the event almost didn’t happen, but some heroic last minute efforts pulled everything together in less than a month. 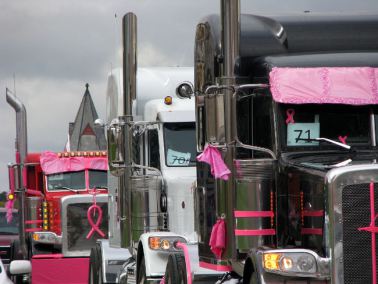 Mercy Sakes Alive, Looks Like We Got Us Some Convoys!

It’s the season for truck convoys and all the work that comes with them to raise money for charities.
In less than two weeks is the Trucking for a Cure Convoy in Woodstock, ON, that begins at the TA Travel Centre, Exit 230 off Sweaburg Rd. There will be a lot of pink on display…on people and trucks.
According to organizers, Trucking for a Cure is a support group on behalf of the Canadian Breast Cancer Foundation-Ontario. The group is made up of professional organizations and individuals in the transportation industry.
Trucking For a Cure says it not only raises awareness and funds for the Canadian Breast Cancer Foundation, but also builds bridges between commercial drivers, the industry, and the public at large, and hopes to unite trucking enthusiasts behind such a meaningful cause.
This convoy on Oct. 3 follows a sister event held last weekend in Prescott, ON, which made its inaugural run in 2014. Together the two events raised $75,000 last year, according to organizers.

When “Big Daddy has cancer,” Truckers Roar in to Help

MIRAMICHI, NB. – On Saturday, May 25, Miramichi will be the scene of what might be one of the largest convoys to ever hit New Brunswick.

Alberta truckers pull together against cancer

LLOYDMINSTER, Alta. — Tom Jack knows of too many people who lost their fight with cancer and with others close to him still fighting the battle, he was starting to get pretty angry about it.

ROCKY VIEW, AB – Each year in September, truckers gather to make the World’s Largest Truck Convoy a great one. And this year, the man who raised The Great One himself, Walter Gretzky, will be there.