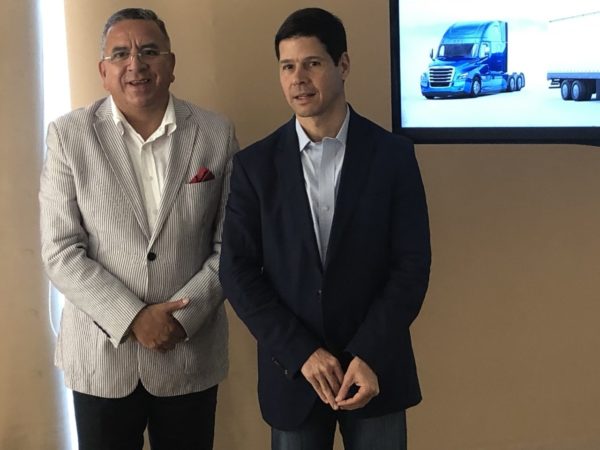 PUERTO VALLARTA, Mexico – Crossing an international border can seem like an Olympian task at the best of times, with challenges ranging from ever-changing regulations to the search for backhauls. But Olympic Transport has been rising to those challenges for […]

Trucking a dominant force in Mexico

PUERTO VALLARTA, MX – In Mexico, there is an undeniable link between trucking and the North American Free Trade Agreement (NAFTA).
The nation is now the eighth-largest producer of trucks in the world; the fourth-largest exporter of the vehicles. And related exports now represent 6.3% of the country’s Gross Domestic Product, says Flavio Rivera, president and Chief Executive Officer of Daimler Trucks Mexico.
The nation’s manufacturing facilities produced 191,000 heavy duty vehicles in 2015 alone, with 151,000 built in 2016. Daimler itself has plants in Santiago Tianguistenco, State of Mexico, and Santillo, Coahuila.

Manufacturing in general has been bolstered by free trade agreements with 46 countries, and 80% of available freight now moves by truck as well. Indeed, gone are the days when oil exports dominated the domestic economy.

“The presence of the trucking industry in Mexico has been gaining ground,” Rivera said, during a broad-ranging discussion with industry media in Puerto Vallarta. “All those [manufactured] goods are absolutely moving by trucks.”
Still, Daimler is offering no official comment about ongoing negotiations around the all-important trade deal. The public focus is on business as usual. “We are continuing producing trucks. We are continuing operating efficient factories,” said Rivera. “The manufacturing plants today are in very good shape. Very modern.” 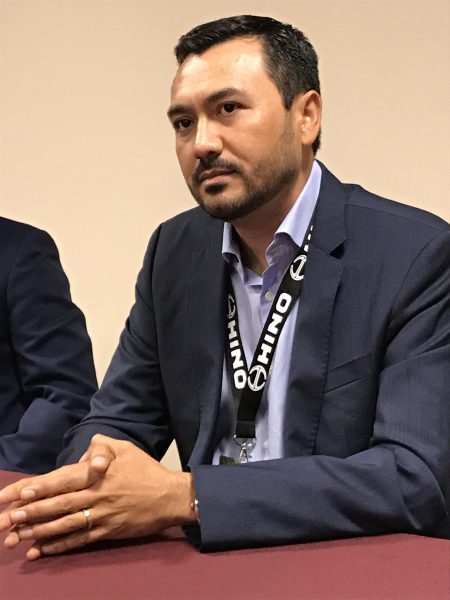 A Mexican trucker’s view of NAFTA

GUADALAJARA, MX – Noe Montes has experienced the benefits of NAFTA first hand. In a single decade he has grown his business from a single truck to a sophisticated fleet with 170 power units and 250 drivers – serving automotive shippers from Linamar to Pirelli.
He’s eying opportunities in Canada, too, particularly in a lane that would stretch between Mexico and Southern Ontario. Gone are the days when Mexican carriers would simply interline with their counterparts in Canada and the U.S., says the owner of Transmontes and its sister company, TM Transportation Services in Laredo, Texas.
But even as the 40-year-old entrepreneur adds to his fleet’s capacity, he is keeping a close eye on NAFTA negotiations. 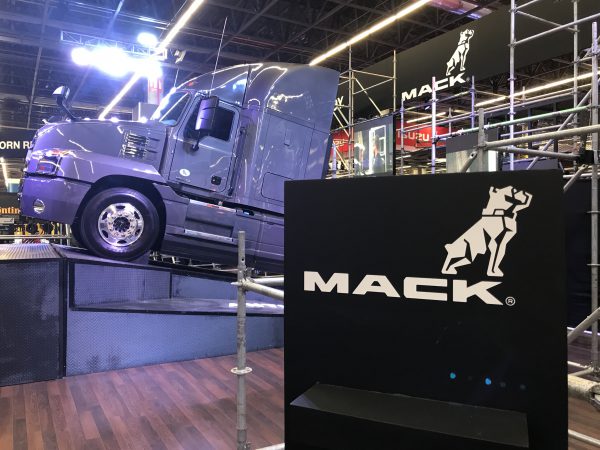 GUADALAJARA, MX – Mexico had its first taste of Mack’s Anthem highway tractor on Tuesday, completing the truck’s North American rollout with an unveiling at the Expo Transporte trade show.
Buyers in the country will also have access to more places to find the trucks and service alike. The Trasca dealership group has officially added 18 new locations to Mack’s network. And in the first quarter of 2018, the Original Equipment Manufacturer will begin sending trucks into markets further to the south, including Central America, the Caribbean, Columbia, and Argentina.
“Mack is in Mexico and is here to stay,” said Eduardo Herrera, vice president – Latin America, when revealing the truck he referred to as the best Mack has ever launched in the on-road marketplace. The model replaces the axle-back version of the Pinnacle tractor.
Mexico’s Anthems will include one significant difference when compared to their counterparts in Canada and the U.S., however. Because of different emissions rules in the jurisdiction, the standard power offering will be a Euro 4-rated Mack MP engine. The fuel-saving GHG17 MP8 engine will be an option, but approved only where Ultra Low Sulfur Diesel and Diesel Exhaust Fluid are available.
“Built with Mack’s legendary durability and our latest innovations to improve fuel efficiency and productivity, the Mack Anthem is designed to meet the needs of our Mexican customers,” said Mack president Dennis Slagle in a related release. “We’re confident that these features, along with the new standard of driver comfort delivered by the Mack Anthem, will help boost Mack’s presence in the important Mexican market.” 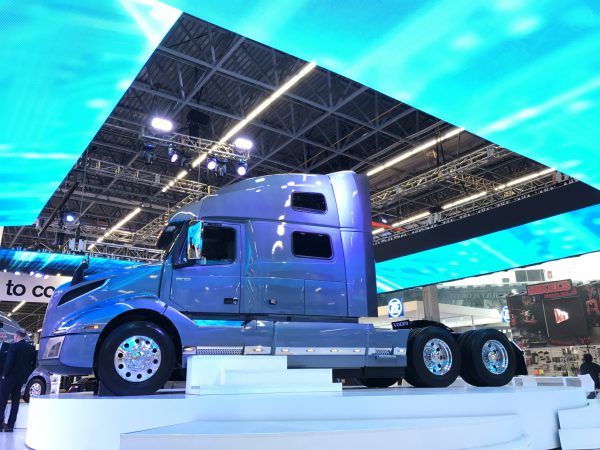 GUADALAJARA, MX – Volvo’s “shape of trucks to come” has come to Mexico, with the official unveiling of the VNL long-haul tractor, VNR regional hauler, and an expanded VAH auto hauler lineup.
It’s a significant expansion of Volvo offerings available in the country, which had previously been limited to the VNL long-haul trucks.
“Mexico is a very important market for us globally,” said Magnus Koeck, vice president – marketing and brand management, comparing the market’s size to that of Canada, with 25,000 to 27,000 in annual sales placing Mexico among the largest truck markets in the world.
Volvo now has a presence in 140 countries overall, with manufacturing capabilities on every continent. The North American models will be built in Dublin, Virginia.
There will be more trucks to manufacture, too. Volvo now projects North America’s Class 8 market to reach 260,000 units next year, compared to 235,000 in 2017. That could even be a conservative number, Koeck added, noting that some analysts are predicting as many as 309,000 units. “We will see if that will hold.”
Buyers around Mexico City will also have easier access to the trucks, through Grupo Alden’s addition to the dealership network following a US $6 million investment. Volvo now has 43 dealer locations in Mexico overall.

WASHINGTON, D.C. – Policy teams representing the Teamsters Union from the United States and Canada on hand during the fourth round of NAFTA renegotiations this week are applauding the decision to fix the NAFTA cross-border trucking provision.
The priorities of the union representing 1.4 million workers in North America, included highway safety, dairy supply management, and worker rights. Also on the table during this round were key discussions regarding the auto sector and manufacturing, and trade disputes.
Teamsters general president Jim Hoffa said independent truckers and highway safety advocates will be pleased with the U.S. position on cross-border services.
“The [United States Trade Representative’s] approach is a creative solution to this long-standing controversy,” he said. “I am satisfied that the U.S. position will permit Congress and the Dept. of Transportation to safeguard the livelihoods of American truck drivers and the personal safety of American families on U.S. highways under NAFTA 2.0.”
Teamsters Canada President François Laporte said Canadian Member of Parliament (MP) and Minister of Foreign Affairs, Chrystia Freeland, and Canadian negotiators have a progressive, pro-worker approach to the talks.

WASHINGTON, DC – The U.S. government has shelved proposals for a border tax that would have been tacked on imports. 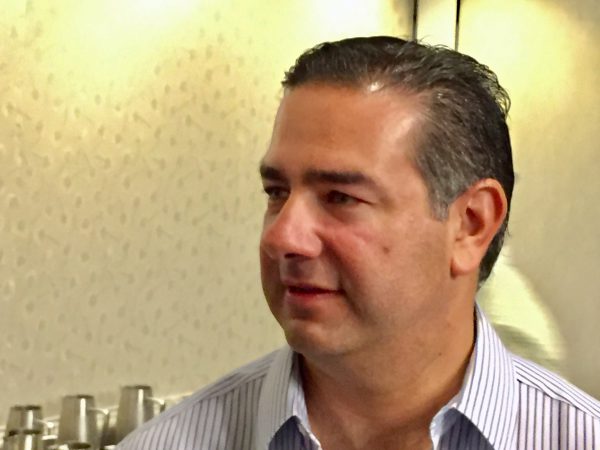 BANFF, AB – Mexico has clearly realized the benefits of the North American Free Trade Agreement. The southernmost member of the trading block is now Canada’s third-largest trading partner, behind only the U.S. and China. “It has been good to us. It has been good to our economy,” says Rogelio F. Montemayor Morineau, president of the 5,000-member Canacar – Mexico’s national trucking association, referring to the trade deal.

It has clearly played a role in the Canadian economy, too. 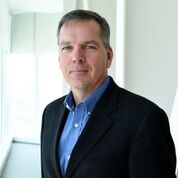 PUERTO VALLARTA, MX – In a year when dealers in Canada and the U.S. face a dramatic downturn in truck sales, Mexico is a world apart. As of November the market for Class 4-8 vehicles was up 18.5%, and Daimler Trucks North America accounted for 36% of it — up 7.8% over last year. But Stefan Kurschner, president and Chief Executive Officer of Daimler Vehiculos Comerciales Mexico, says there’s room for more. 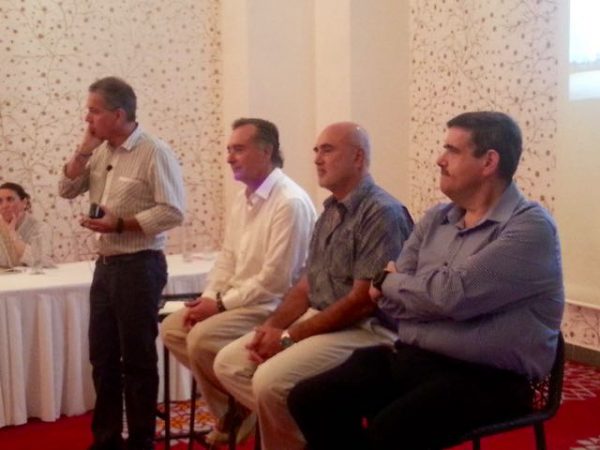 Trucking in Canada a Breeze Compared to Mexico

PUERTO VALLARTA, MEXICO — You might think that trucking in Canada is overregulated, but Mexican fleets might envy you, because the lack of regulation way to the south creates economic chaos in the country, according to what we heard at a press event organized by Daimler Trucks North America in Puerto Vallarta.

Daimler invited three fleet executives to take part in a discussion panel where all questions were welcomed and candidly answered.

The age of the fleets, unfair and illegal competition, diesel black market, waiting times and lack of good infrastructures are among the main problems according to panelists. 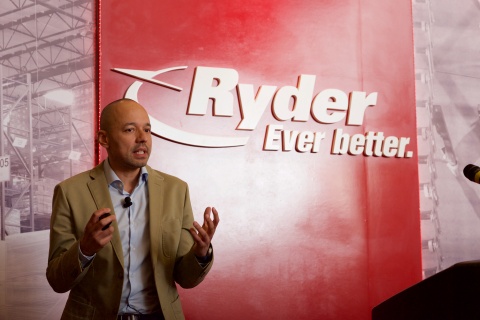 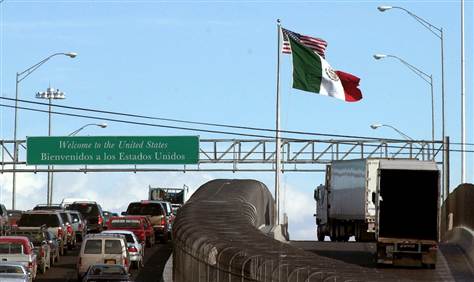 WASHINGTON, DC – Trucking imports to the U.S. rose 4.2 percent year-over-year in April, according to the U.S. Transportation Department.

WASHINGTON, DC – Trade between U.S. and its neighbors, Canada and Mexico, rose by 6.2 percent year-over-year in March, totalling $101.5 billion, according to a new U.S. Transportation report.

WASHINGTON, DC – The value of U.S. trade with Canada and Mexico was $103.1 billion in October, exceeding the $100 billion mark for the first month on record, according to the U.S. Department of Transportation.