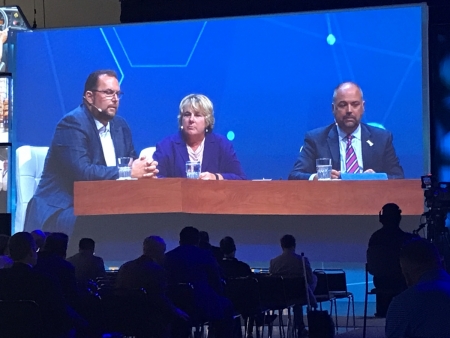 ORLANDO, FL – The U.S. is approaching a record truck driver shortage, requiring 50,000 for-hire drivers this year alone – and the problem is expected to intensify in the next decade.

Turnover rates in the truckload sector are expected to reach 90% this year, said Bob Costello, chief economist at the American Trucking Associations, during the group’s annual meeting in Orlando.

“It feels much worse to you,” he said, noting how the shortage ranks high on the list of top issues tracked by that American Transportation Research Institute (ATRI).

By 2026, the shortage is projected to climb as high as 174,000 for-hire drivers. At those levels there will be an impact on supply chains, Costello said. It may be the day when people go to the grocery store and discover seven varieties of apples waiting for them instead of 10, he added.

The numbers are based on today’s 864,000 for-hire drivers of heavy trucks and tractor-trailers, about half of the 1.7 million drivers of such drivers overall. There are 10 million holders of Commercial Driver Licences in the U.S., but many of those are retirees who have held on to their qualifications, Costello said. The overall 3.5 million Americans who count themselves as truck drivers work behind the wheel of everything from dump trucks to refuse vehicles.

The turnover rates in the Less Than Truckload sector are closer to 9%, largely because its drivers tend to make more money and get home more often, he said.

“First and foremost it is a demographics story,” Costello added, referring to the aging workforce. “The trend line doesn’t look good.”

The industry also faces stiff competition from job opportunities in other sectors such as construction, which created 1.3 million new jobs in the last five years.

Derek Leathers, president and Chief Executive Officer of Werner Enterprises, stresses that the shortage is really about quality drivers. His fleet is hiring just 2.7% of applicants.

Rebecca Brewster, president and Chief Operating Officer of ATRI, referred to the 4.4% of drivers who are 20-24 years old. “We are not bringing young people into this industry in numbers and volumes that we need to fill those requirements,” she said.

Leathers sees an opportunity in reaching out to younger men and women who are saddled with college debt and want to explore a trade-based career path.

“I think we’ve lost our way a little bit as a country,” he said, referring to youth who are not exploring trucking careers.

For its part, ATRI is already studying whether it is possible to identify younger drivers who share common characteristics with safe, older drivers, perhaps creating a path for those under the age of 21 currently needed for interstate trucking.

Costello questioned whether higher driver pay would be a solution to the problem. A lot of drivers would love it, he said, but many would just decide to work less and make the same wages seen before the increases.

But there has been an undeniable increase in bonus payments. Safety bonuses in the U.S. now average $1,499 per driver, with bonuses for on-time deliveries reaching $1,946, starting bonuses $949, and retention bonuses $1,143.

“There is no one solution to the driver shortage,” he said.