Zonar has unveiled its new Connect tablet, basing it on the Android operating system so it can be easily customized. 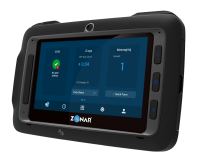 Protected with features including Gorilla Glass, the ruggedized tablet always remains linked to the outside world by combining LTE, WiFi, Bluetooth and RFID connections, recognizing that some fleets will want drivers to be able to use it outside the truck.

The device can even integrate with Electronic Vehicle Inspection Reports, using an RFID reader and tags around a vehicle to confirm a driver has actually worked their way around the truck during a pre-trip inspection, showing exactly how long they dwelled at each inspection points. A customizable interface can include information such as available Hours of Service at the top of the screen.

There is a quad-core processor including 2 GB of built-in memory and 32 GB of storage, and it will run for 10 hours in a standby mode or three hours in continuous operation. It also recharges whenever it is secured in its cradle. The first version is being launched with Android’s KitKat operating system, although there are already plans to upgrade to Marshmallow in the near future.

Zonar’s existing 2020 tablet will continue to be offered at a lower pricepoint.